The Gap into Mirror Land Wiki
Register
Don't have an account?
Sign In
Advertisement
in: Fandom, Against All Things Linden, Srs bsnss

(The following is written by one of the fanatics within Linden's Army and thus its veracity should be viewed with extreme caution.)

The Holy Order of Linden Avery Haters (THOOLAH) is a dangerous fan cult devoted to the utmost despising of Linden and taunting the members of Linden’s Army (LA). They sacrifice black goats at 6:66 (a special diabolic clock using shorter seconds) to Lord Foul every morning beneath the rising Sunbane while Gibbon-Raver chants cyclopean blasphemies before the congregation, thus preparing his sacrilegious lambs for another overcast day oozing with bile and venom towards The Queen of Whiners. Whereas the opposing party can admit that a weepy, whimpering, woe-ridden anti-heroine can possess positive qualities, they concentrate only on scrutinizing the flaws, and Lord Foul can cackle yet another content muwahahaha while casting a somber shadow over his worshippers.

THOOLAH is also not afraid to bring their passionate beliefs before the very Creator himself (go to Intro 4), and even in the face of such calumny they only grow stronger.

The insane Giant Longwrath serves as the sect’s official mascot. He actually lets the members pat him on the head, unlike his devastated Swordmain friends, which results into a kind of lionish purr.

(The following is written by an actual devout THOOLAH member and thus is impeccably flawless in its fairness and accuracy.)

In the interests of balance, it is important to achieve a reasoned perspective upon THOOLAH - entirely unlike the dribbling and quintessentially inaccurate ravings posted above - no doubt authored by one of the more swivel-eyed members of Linden’s Army, all of whom positively reek of the anchovies that they consume in the name of their useless idol.

THOOLAH - the acronym standing for The Holy Order Of Linden Avery Haters - is a caring yet reasoned support group for those who simply can no longer tolerate another hundred or so pages of description of Linden Avery doing precisely nothing. Nothing, that is, apart from ear-jarringly whining, blubbing snottily into her hands, self-obsessedly peering into the depths of her own navel and agonizedly staring at the grass stains on her jeans, in case there's some secret message contained therein, while the world falls to ruin around her ears. (Ironically, there actually is a message to be gleaned from her grass-stained jeans, if only Linden were smart enough to realize it - it's "Either get a biological washing powder or just go buy a new pair of damn jeans, you cry-baby loser!").

Members of THOOLAH have shown themselves invariably to be intellectually gifted, profoundly thoughtful and, above all, acutely perceptive. This is how they have come to realize beyond any shadow of a doubt that Linden Avery - variously and correctly known by group members as the Princess of Procrastination, the First Lady of Fretting, the Archduchess of Annoyingness, the Baroness of Blubbing or the Imperatrix of Inaction - should be reviled and castigated with every fibre of any right-thinking person's being. 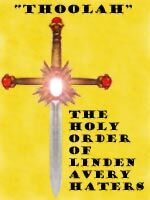 Enlightened members of THOOLAH religiously keep their razor-sharp perspicacity well-honed by exchanging Zen-like epithets and riddles, such as:-

"Anchovies, much like Linden Avery, are about as appealing as Satan's butthole", and

"What's the difference between Linden Avery and a bucket of watery crap? The bucket", and

"How do you stop Linden Avery from drowning? Take your foot off her head... but why ever would you?"

Devout followers may be identified by their sporting of the mark of THOOLAH, the sacred symbol of the order. Thoolahians have this arcane rune tattooed onto their right bicep, in the hope that its mystic powers will lend their arm holy strength if they are ever fortunate enough to find themselves within smiting distance of Linden. This proud bearing of the holy symbol of their order is again something that differentiates the righteous members of Thoolah from their effete and frankly counterparts within Linden's Army. Those latter wusses only dare embroider their own sickeningly cutesy emblem onto their clothing, using pink velour and ribbon to fashion a nauseatingly sucrose heart symbol containing the vile initials of the Archduchess of Annoyingness.

The other sacred object that all Thoolahians tend to carry is a holy box of Kleenex™ tissues. It is written that, if faced with such a thing, Linden (who, let's not forget, is the very quintessence of blubbing) will be inexorably drawn into it, disappearing for all of time and thus sparing the myriad ears of the cosmos from her incessant and grating whining. Thoolahians live in the devout hope that this is true.

Whereas the members of Linden's Army at least enjoy a healthy, albeit slightly smelly, fish cuisine, the basic sustenance of Thoolahians comes from the Foul Despishroom which desecrates almost all life around it. The effects of the attar-smelling poison may be lessened a teensy bit by cooking the horrid fungus for a couple of days, but it will still overtake the mind of the poor eater as the shroom is actually one of the direct manifestations of Lord Foul in this world.

Much of the confusion that reigns supreme about Linden Avery among those of diminished intelligence that support the whiny loser stems from a simple misheard statement. When Linden was first transported to the Land, the Creator told her that she was "the Frozen One". Of course, the Creator, being omniscient, knew exactly that Linden would spend all her time paralysed by self-loathing, self-doubt and an irresistible urge to constantly perform the most obsessed of self-examinatory navel-gazing - she would be forever frozen into inaction while those comrades around her died like flies and the world went to rack and ruin. This is exactly why He presciently gave her the title of "the Frozen One" in acknowledgement of Linden's complete and total incapability of doing anything useful at all. Unfortunately, some people misheard this and thought that the honorific bestowed upon to the worthless crybaby was actually "the Chosen One" (!!!) Obviously, nothing could be either a) more inappropriate or b) further from the truth and thus THOOLAH is relieved to set the record straight here.

(Doesn't this particular dictionary definition give you any thoughts? A flexible tube for conveying a liquid... and that's not the only fun meaning! ~a-Jeroth)

(Theory #2: The Creator actually meant "The Chosen One", but a bee happened to fly into his nose at the moment of declaration, causing him to sneeze, and utter the title wrongly. Luckily the Landians heard this almost right, including "The Hosen One", which merely states that the Sun-Sage would wear jeans, with or without grass stains. ~Kaukomieli)

THOOLAH members find themselves eternally in conflict with the poor, benighted, misguided lost souls that make up the noisome rabble that is Linden’s Army (LA), which for some reason (they probably need to get out more) worships Linden Avery as if she's some sort of example to look up to, rather than something you should wipe off your shoe. This misconception is so drastically and dramatically wrong that it is sadly less than fanciful to assume that the only qualification necessary to sign up with the abomination that is Linden's Army is apparently to have an IQ smaller than one's shoe size. This unfortunately seems to be something that the Army's thus presumably lack-witted, mouth-breathing, slack-jawed and knuckle-dragging members achieve with consummate ease.

The sole matter upon which members of THOOLAH and their seemingly far less-evolved counterparts in Linden’s Army will ever agree is that those who comprise the devotees of that wishy-washy sect known as OPAL (Opinion Pending About Linden) need to grow a pair and get off the damn fence.

(How would you classify: I don't really hate Linden - she didn't grow up to the level enough to be hated by me and she has her uses as well. I most certainly don't have an opinion pending - I know what she is and I surely don't love her... or am I LA after all? ~Lord Foul)

Were one to visit the page on this Wiki dedicated to Linden's Army, one would find a hastily cobbled together and frankly tragic list of Linden's alleged supporters. It cannot sadly be denied that the Princess of Procrastination does have some misguided fools that lend her their support, but what is simply crucial to understand is the reason why such support is given. Here is a carefully broken-down and fully analysed list of Linden's supporters:-

Those sympathetic towards Linden (because the pervs just want to get into her grass-stained pants, either consciously or unconsciously).

Those sympathetic towards Linden (because they're just gormless wide-eyed fanboys - or girls - that don't know any better).

Those sympathetic towards Linden (because they're just too kind-hearted and can't bear to see someone blub so much).

Those sympathetic towards Linden (because they recognize a kindred pathetic spirit).

Those sympathetic towards Linden (because they're either off their face on shrooms, catatonic, schizophrenic or just plain batshit mad).

The opposing list of those who utterly despise and execrate Linden is far too large to reproduce here in any detail. However, this brief summary should suffice:-

Those who would rather gnaw off their own feet than listen to another minute of Linden's incessant whining.

All right-thinking sentient people, creatures, beings and other entities.

Finally and most importantly, there is one individual who detests Linden Avery so much that it conclusively and incontrovertibly proves the righteousness of THOOLAH's case once and for all...

Those who loathe Linden far more anyone else does. In fact, far more than it should even be possible to do.

Who are we at THOOLAH to disagree with the judgement of the Imperatrix of Inaction?

Community content is available under CC-BY-SA unless otherwise noted.
Advertisement